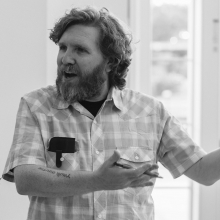 Jay Morong is an educator, film programmer, director, actor and theatrical video designer. His theatrical video design work includes: Hamlet, The Purple Flower, The Colored Museum, The Winter's Tale, Nocturne and [sic] all at UNC Charlotte; Tales of the Lost Formicans at the University of Massachusetts at Amherst, and Requiem For New Orleans, Simple Thoughts and In The Master's House There Are Many Mansions at the New York International Fringe Festival. He has directed several productions at UNC-Charlotte including, The 25th Annual Spelling Bee, Mauritius, The Aliens and It’s A Bird, It’s A Plane, It’s Superman … The Musical.

Jay earned his Master's Degree in the Philosophy of Film and Theatre from Boston University and a Bachelor of Arts Degree in Philosophy from Assumption College in Worcester, MA.